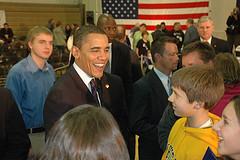 The next June 7 members of the European Union we will exercise our right to vote to designate the future MEPs. Election campaigns in most countries are already underway to attract the electorate, which tends to be low in this election. To this end, devotes a large part of the budget to organize events with the militants, press advertisements, radio and television and outdoor advertising. Unlike other years, and especially Internet Social Media, have become the best advertising by political parties to approach the population. Following the example of Barack Obama’s campaign on the Internet, described by Luis Salvador, spokesman for the Senate Science Committee of the PSOE and one of the leaders of the online campaign of Zapatero in the recent elections as “clearly instrumental in conversion of young supporters into activists, “PP and PSOE are already developing its most interactive. It is clear that if Roosevelt was the president of the radio and it was Kennedy the television, Obama is already the president of the Internet as noted by the environment of the President of the United States. For many no doubt his campaign’s approach has been a milestone in the management of the Internet as a social agitator and a clear example for the rest of the world’s politicians. On 20 April was Leire Pajin, PSOE organizational secretary, who presented: activistasPSE.net. The Popular Party, with the help of its president, Mariano Rajoy, has not wasted time and popular.es earlier this month launched its own social network. Both actions are completed in Social Media on Twitter or other blogs for more visibility on the Internet towards the next election. In spite of failing to achieve the same level of participation that Americans with Obama, who has 4 million fans on Facebook, while Zapatero Rajoy has 14,000 and has even profile, is a first step towards habits younger population and a test of modernization of political parties for future campaigns.